Minecraft — Arguably the most famous and popular digital sandbox game. In it they build entire buildings and even cities — you are only limited by your imagination. But sometimes the standard features are not enough, and then come to the aid of mods. We will tell you about the eleven most popular mods for Minecraft.

This is one of the most global mods that adds a lot of new things to the game but does not complicate the interface and interaction, as do many other modifications. This add-on upgrades tool crafting, which in turn expands the player’s capabilities. 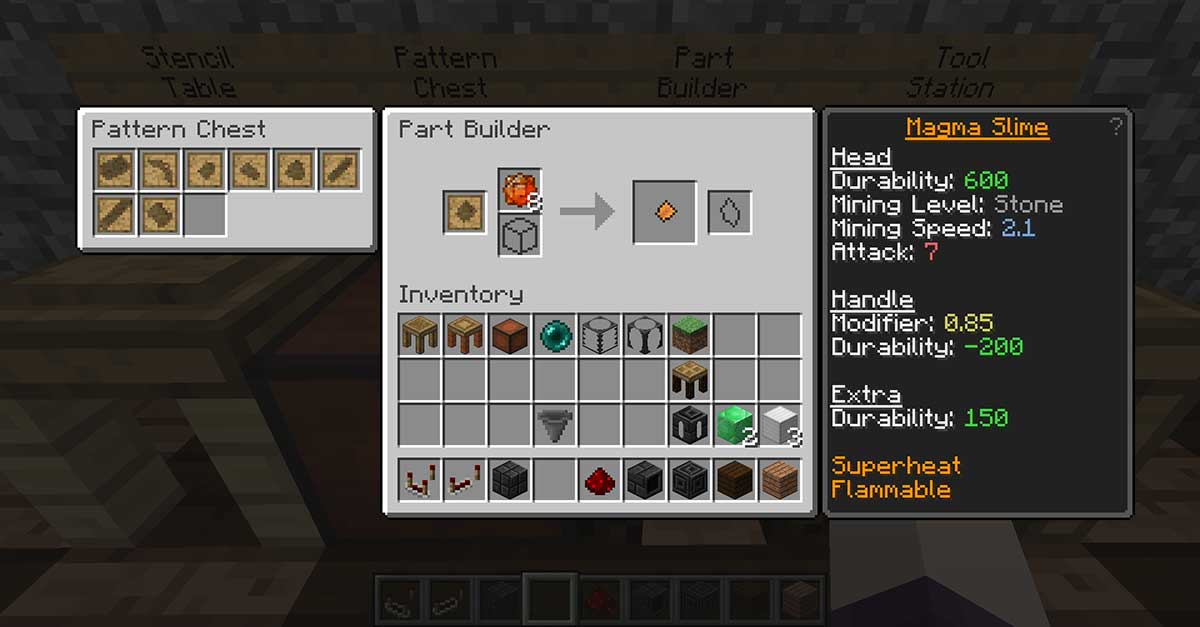 Even more, materials can now be obtained from classic resources. It also adds new tools and weapons. Different combinations allow you to give items different properties from each other. As a result, even experienced gamers will again have something to do in Minecraft.

The modification also adds a new biome – the flying island of slugs, where you can get slime blocks and meet new mobs. To keep players from getting confused by the new content, the modification immediately gives out a tutorial book called «Materials and You» — in it you can explore in detail all the combinations and innovations. 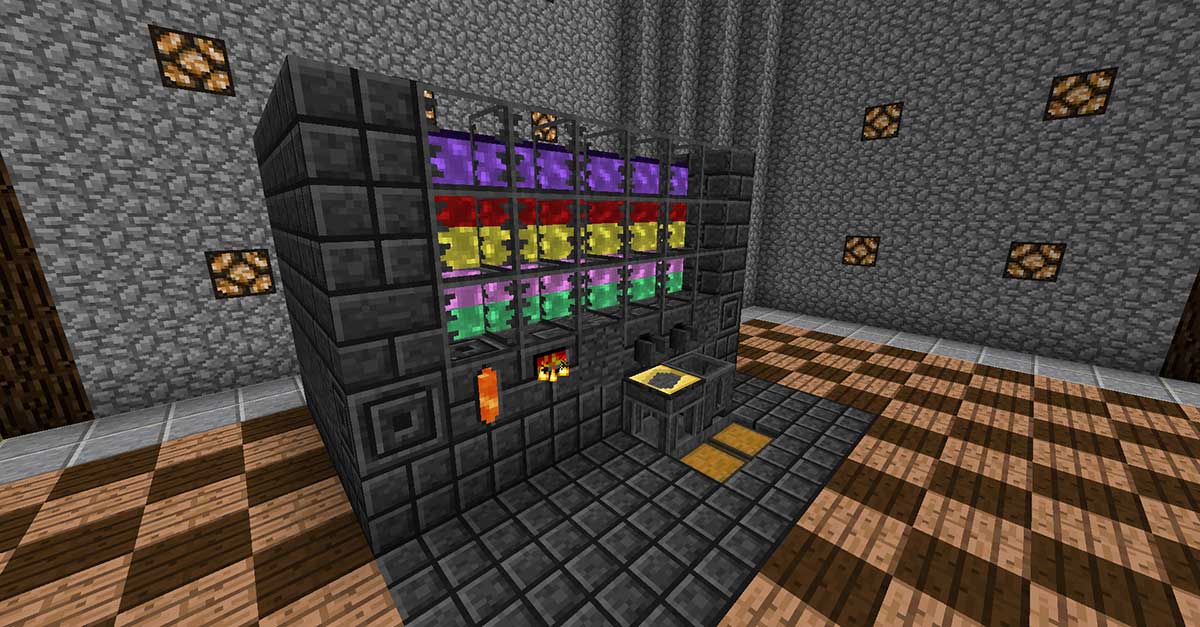 Tinkers Construct will unlock new facets of Minecraft and find a few more hours of entertainment.

What is the problem for beginners who just want to get acquainted with the world of Minecraft? For most, the most frustrating discovery is the lack of a map per se. As a result, every gamer at least once, but got lost in the expanse of a thousand blocks. It’s also easy to fix – is enough to put a small but very useful mod JourneyMap.

JourneyMap adds a full map to the game, as well as a mini-map that can be conveniently placed to the side as in most open-world games. Flexible settings allow you to display almost anything – caves, mobs, and more. What is most interesting, the data is displayed in real-time, and the map can be opened even in the browser. 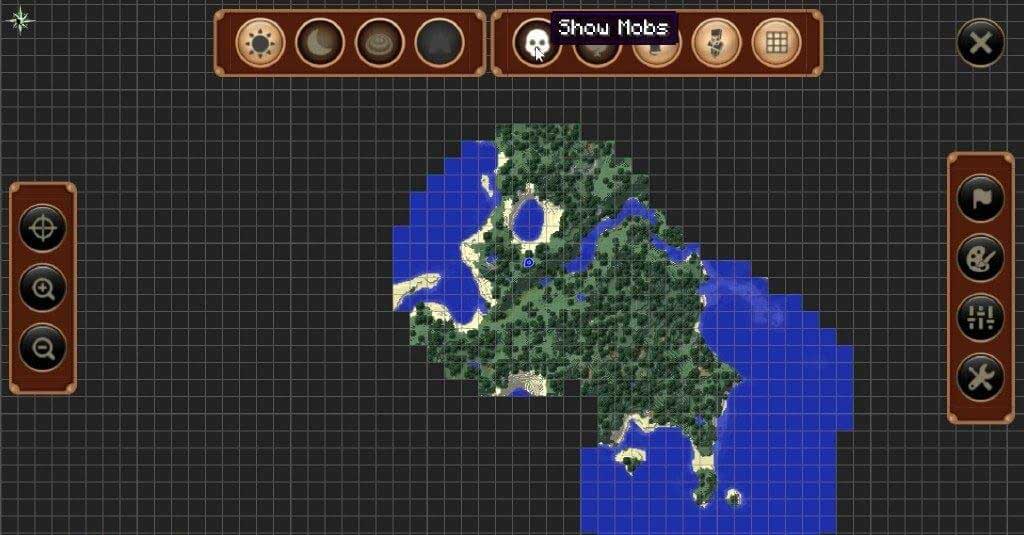 The map also lets you see what the world will look like at night. It is useful to assess the level of light in an area. Mod allows you to leave your tags on the map and save photos. All this is available in Russian.

Installing numerous mods can be carried away so that understanding all the combinations and recipes for making it will be just impossible. If you don’t want to spend hours on forums searching for answers, make sure you install JEI.

Just Enough Items (JEI) allows you a couple of clicks to see how to craft a specific item. First, it’s useful for beginners who don’t know the basic combinations and don’t want to waste time trying and experimenting. Secondly, the modification will save when you have other add-ons that add dozens or even hundreds of items at the same time. 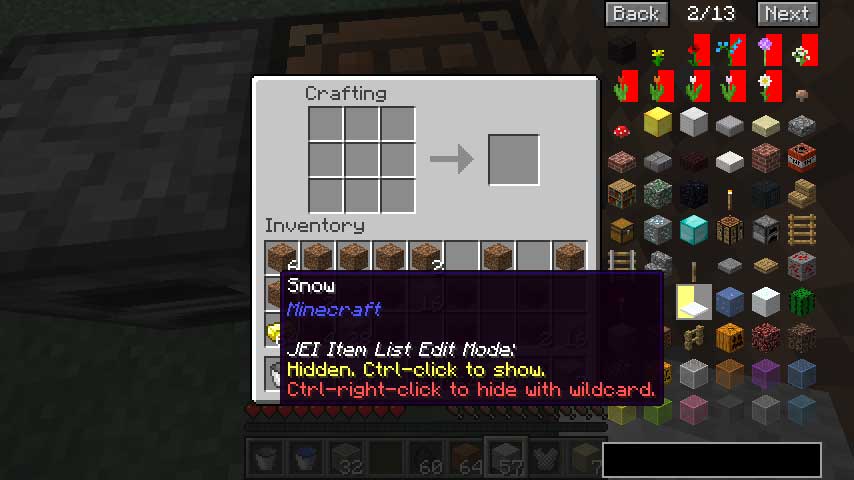 With JEI you only need to select an item and see how to craft it. It is a huge time saver, although the joy of the discoverer will not be as bright. If necessary, you can cheat even more and immediately get items to craft.

If you miss agriculture in Minecraft, try installing Forestry. The modification adds new types of trees, items, and mechanisms, as well as the ability to create manual and even automated farms.

One of the main features of the mod – is the appearance of bees. They can be bred in apiaries, and the insects themselves will give not only honey but also other interesting benefits. Different trees will be needed for the bees, and fruit trees will even be used as food. Beekeeping opens up new possibilities for crafting, such as wax, latex, thread, and more. And for the player not to be bitten, the beekeeper will have to get the beekeeper’s clothing. 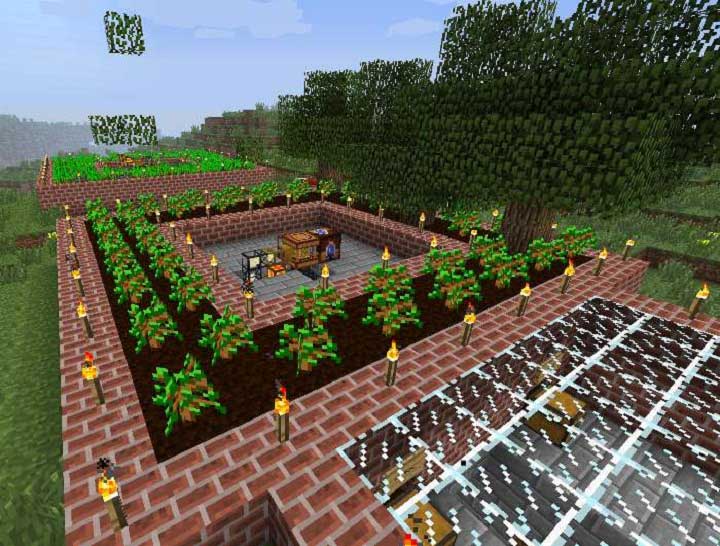 It is also worth noting that in Forestry there is also a system of breeding butterflies. The mod is compatible with other major add-ons such as BuildCraft and IndustrialCraft 2, so feel free to put them together.

If you’ve explored the standard Minecraft map up and down, why not try something new? As an option – go to the mysterious twilight forest modification The Twilight Forest. It is a completely new area covered with giant trees in the dusky light.

No less impressive modification from a technical point of view. Many new biomes await players – Highlands, swamps, fiery bogs, mushroom locations, and not only. New hostile and even friendly mobs will appear. 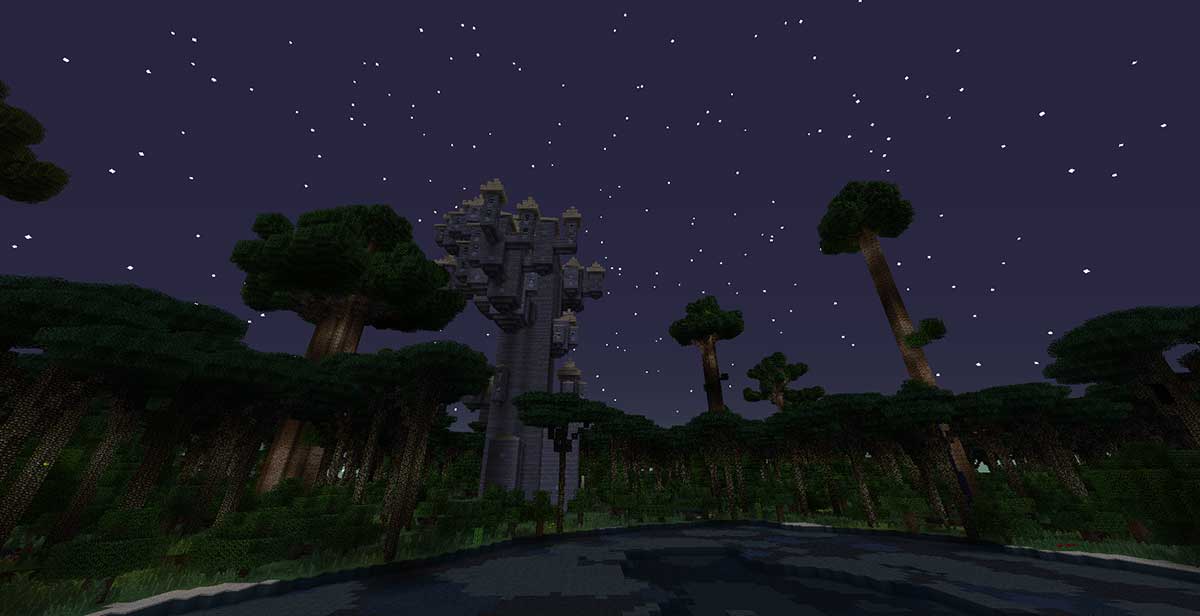 Also in some parts of the forest, you will find mysterious ruins in which valuable treasures are hidden. The developers have even added mazes for those who love complexity. In addition to the typical enemies, you can also encounter bosses, including the Naga, the Twilight Lich, the High Gust, the Alpha Bigfoot, and others. But be prepared for the fact that in the forest there is no alternation of day and night, so the twilight will last forever.

The Twilight Forest – is a new and well-thought-out adventure for those who have already fully mastered the game and are looking for a new experience. 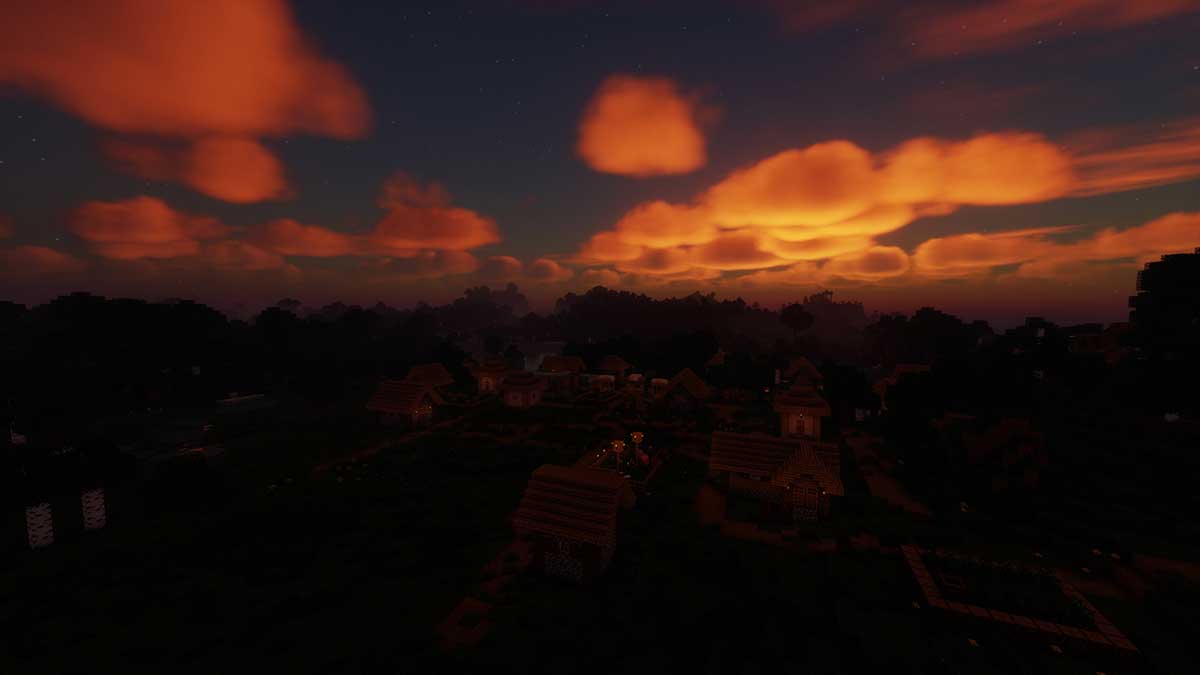 Meinkraft on RTX looks just amazing, but what do those who have graphics cards that do not support «rays of goodness»? Of course, mods can help, but only if you do not have the oldest video card. One of the best representatives in the category of improving graphics is Chocapic Shader.

Even on low settings mod greatly transforms the game, making it more photorealistic. Cranking up the settings to maximum, you get an environment no worse than the top of the RTX. The developers created realistic generated clouds and beautiful water and fog effects. A great job was done on the lighting.

Optimization is commendable, so by changing the settings you can control the FPS in 5-10 fps gradations. At the same time the picture is not dazzling with bright effects that hurt the eye. Of course, the effects of passing through the leaf’s sunlight you will not notice here. However, for a regular mod, these improvements will be more than enough to take a fresh look at the beauty of the game.

Techguns (shooter in the spirit of Call of Duty)

What else is missing in Minecraft – Many people don’t mind turning the game into a fast-paced shooter like CoD or an addictive RPG like Fallout. And this is not a problem if you put a modification called Techguns. 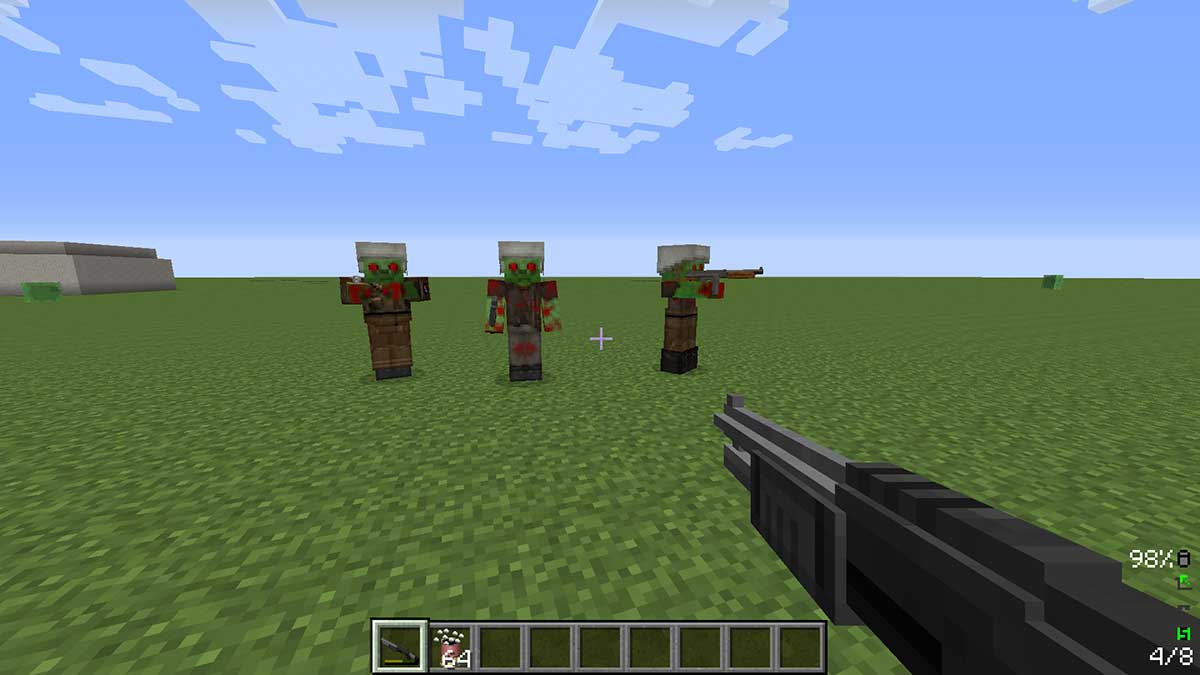 The mod adds to the game a huge variety of guns, a variety of armor, NPC, and related equipment to make all these toys. Bottom line – you can shoot with guns, submachine guns, and heavy weapons like miniguns and bazookas.

If that doesn’t look fancy either, then feel like a demon fighter with all sorts of futuristic weapons. Plasmometer, Railgun, Acid, and Electric Weapons. To have someone to shoot, the developers have also made more dangerous monsters, each of which can also carry weapons and even armor. 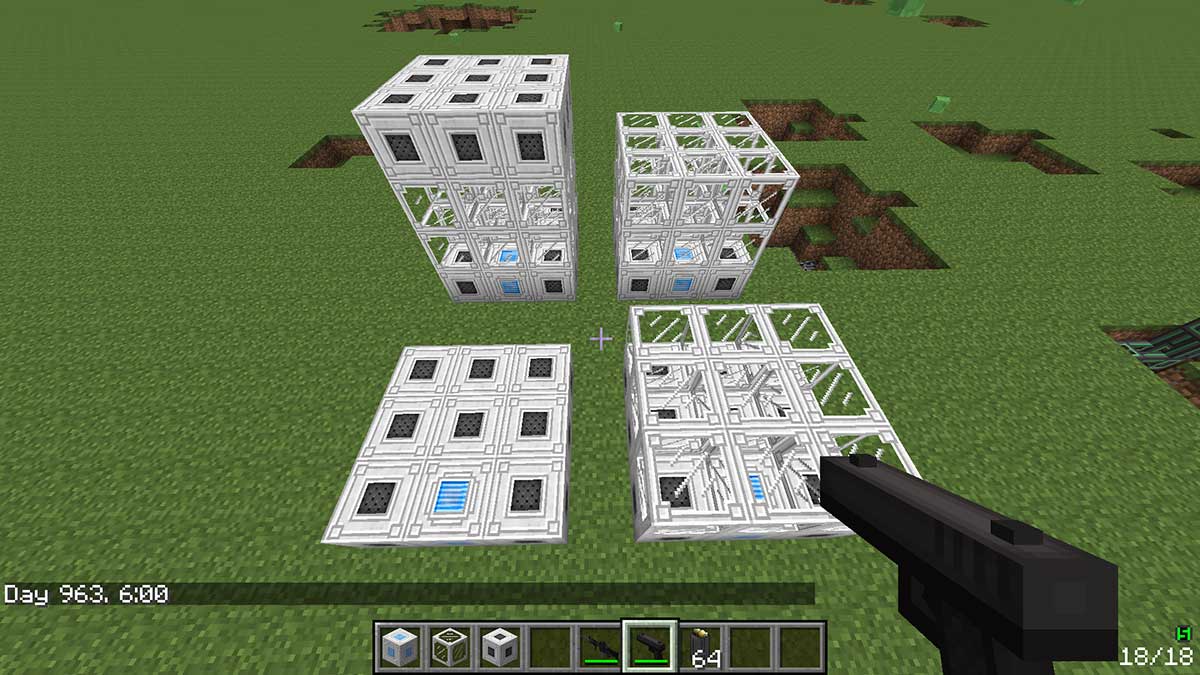 In Techguns they added even the most complete sniper rifle with a telescopic sight. Pleasantly pleased and references to other games, such as a cannon from Unreal Tournament and the power armor from Fallout.

As a result, the mod allows you to turn the game into a classic Doom or dynamic Far Cry. Isn’t it crazy??

Everyone has different computers, so adjusting the graphics under the performance of his iron is problematic. The same problem applies to Minecraft. Fine-tuning the graphics is possible with the mod Optifine. It is suitable for powerful computers that can squeeze the maximum out of the game, as well as for weak computers that need to achieve a stable FPS without major losses in graphics. 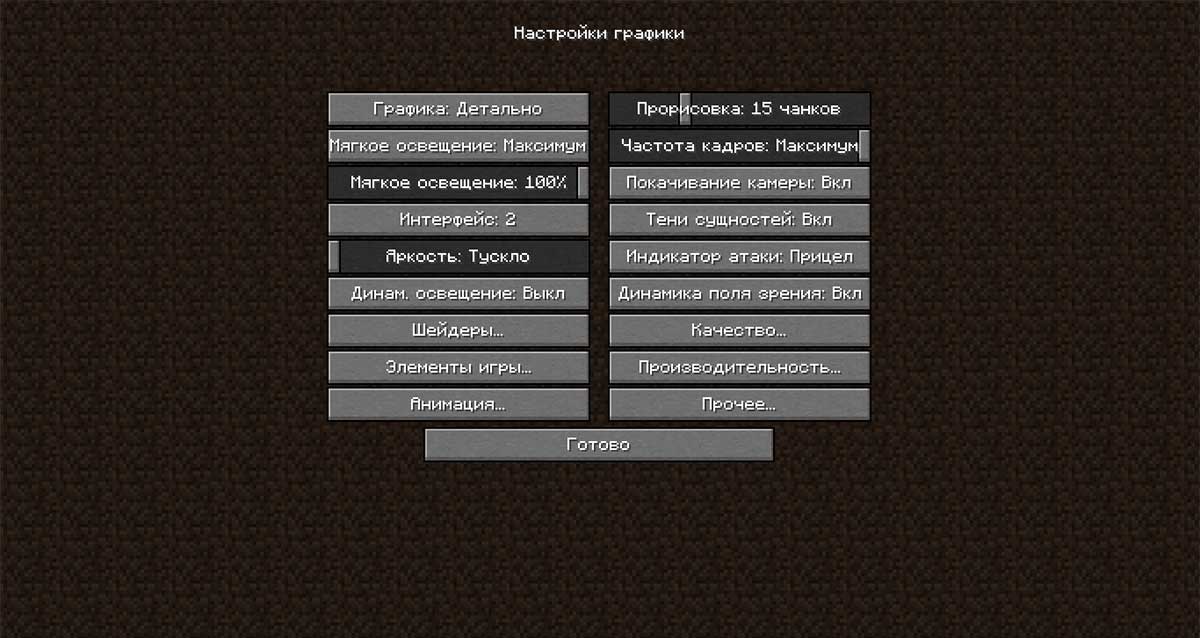 There is support for HD textures, shaders, and dynamic lighting configuration. Users can also adjust the fog, vertical sync, turf and snow display, and more fine-tuned textures. Separately worth mentioning about the item change animation. Optifine even allows you to adjust the change of day and night and automatic saves.

Many people are advised to put Optifine right away, regardless of whether they are going to install other modifications. This is a powerful tool to change the graphics in the game, which will help optimize the frame rate.

Among the variety of mods are those that fundamentally change the familiar Minecraft. A clear example — Is thaumcraft 4, a global modification that adds magic and everything related to it. Useful for those who want to add a little fantasy to the game.

The changes will affect almost everything. On the map will appear new plants and biomes – the magic forest is the biggest. In connection with this, you will also have to mine new materials – wood magic trees, seedlings, and various ores that will be useful for crafting. You will find here new tools and equipment. 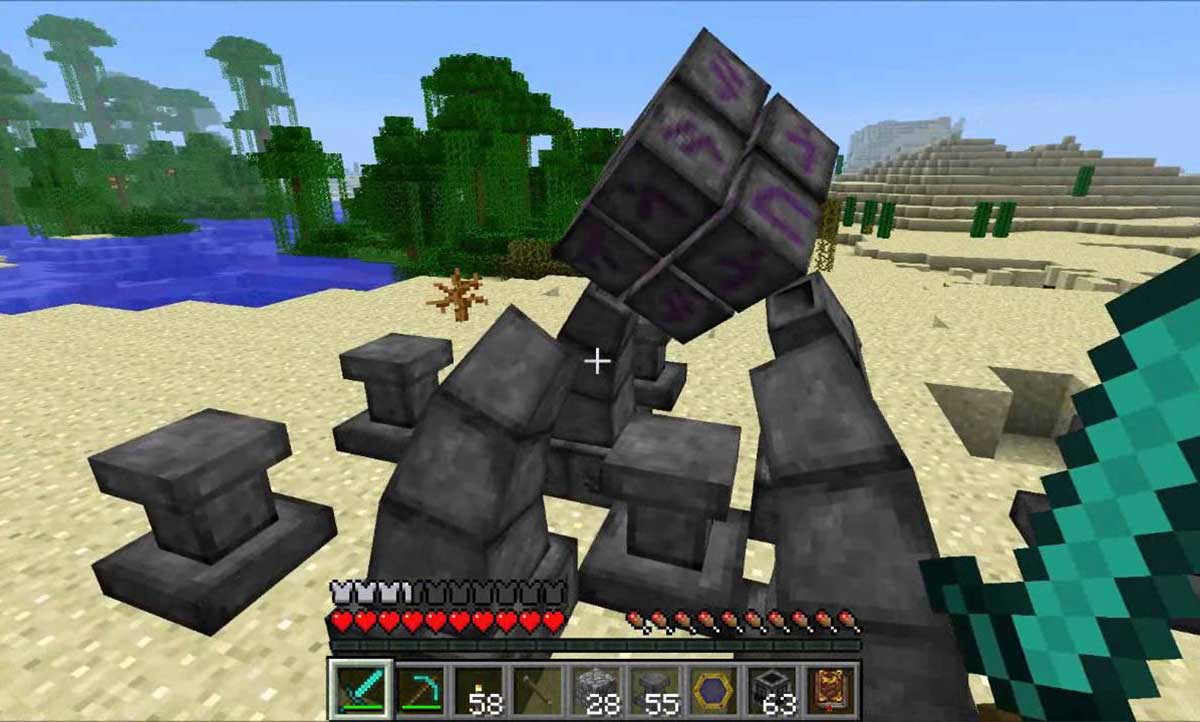 The style of the game will be changed. Now you can use magic, there are wands. The gameplay will be somewhat reminiscent of Harry Potter’s journey into the forbidden forest, where you will have to carefully search for ingredients, prepare potions and survive.

Note that there are also Thaumcraft 5 and 6, but they have only minor stability improvements and bug fixes. On the other hand, they may be incompatible with your version of Minecraft.

Among the most interesting modifications is Galacticraft. As the name implies, this mod is space-related, and it is true. It adds space rockets and many colonizable planets, and the game turns into a real galactic odyssey. 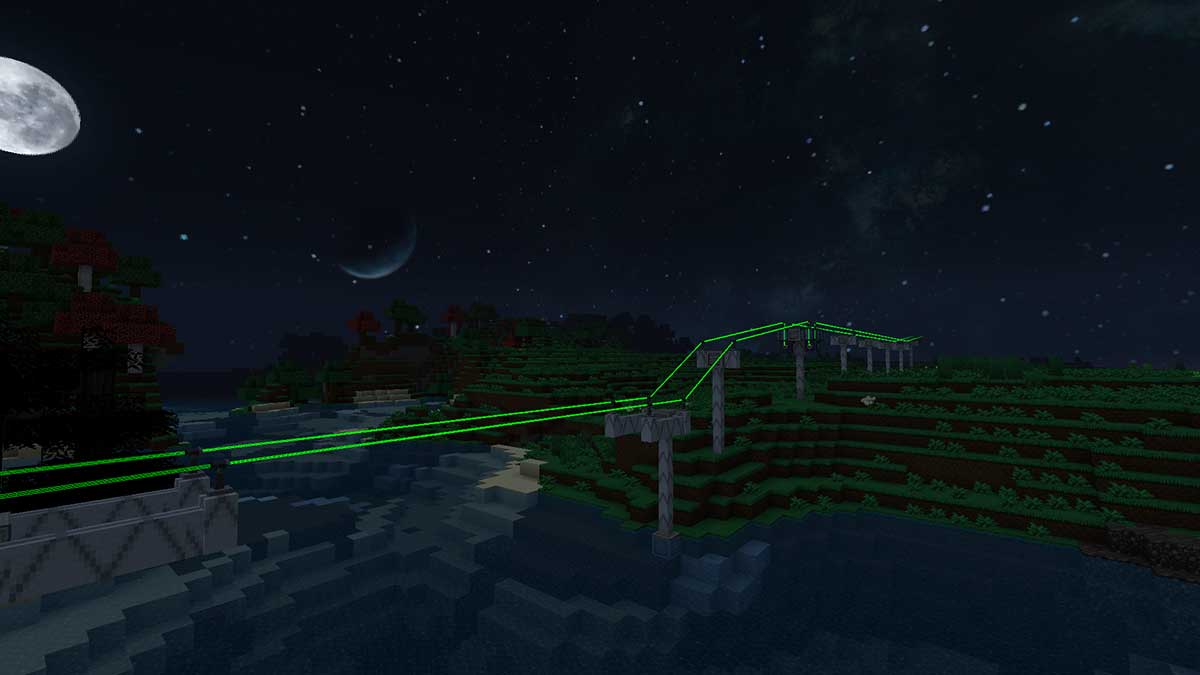 The world has unique planets, each of which, depending on its parameters, is capable of generating certain resources. First, the mod offers different levels of gravity. This directly affects the critters. On worlds with low gravity, mobs will move faster.

Secondly, the planets have their coefficient of fitness for life, so you will often come across lifeless worlds. It’s just like in real life. Players will find an orbital station and even a lunar village. Transportation is represented by several types of rockets and buggies, similar to the Apollo mission lunar transport. 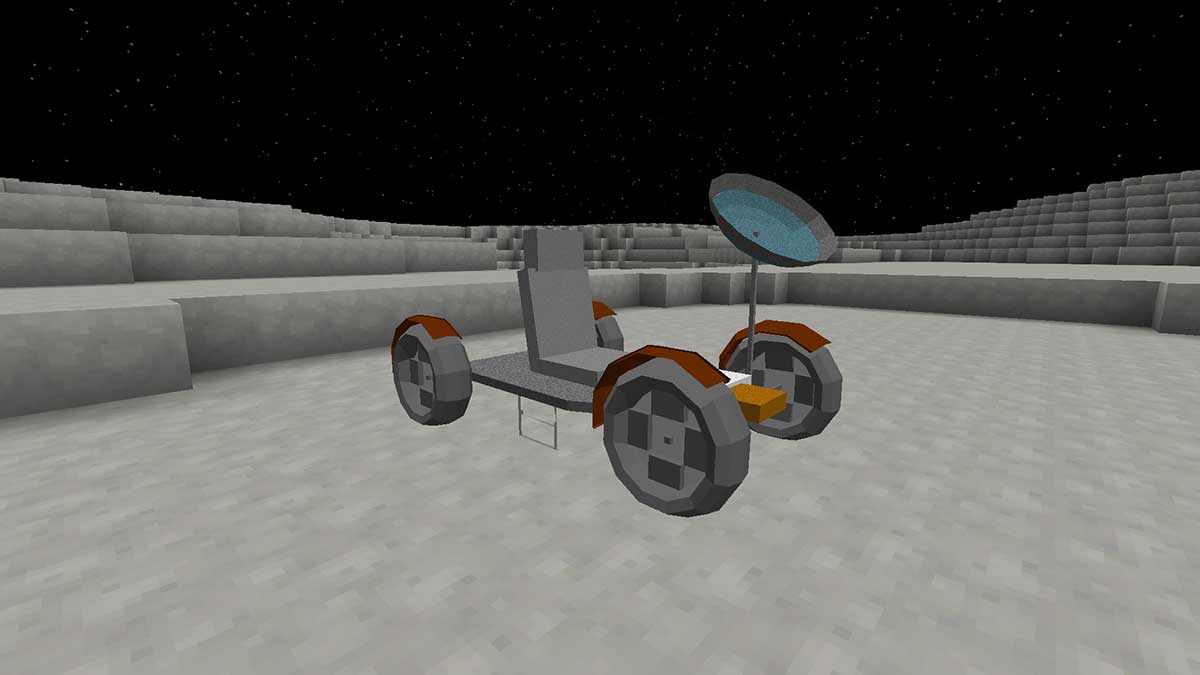 In the standard version, Earth, Moon, Mars, and Venus await you, but dozens more planets can be added to this set. Galacticraft – it is a fascinating and addictive modification, especially if you like everything related to space.

Ever dreamed of a new role-playing game in the universe «Harry Potter» and a chance to wander the various nooks and crannies of Hogwarts? Witchcraft and Wizardry mod for Minecraft will allow you to escape with your head into the famous magical setting and become a student of the very school where you studied «‎The Boy Who Survived».

Players are expected to fight monsters, trade in the Cosmic Alley, perform various tasks, and solve riddles. Modders did a colossal job of recreating many locations from the movie series. It’s not just ‎Hogwarts and its outskirts, but also the famous train station with a platform «nine and three quarters», Weasley House, and many other locations that will be extremely interesting for fans to visit «Potter». 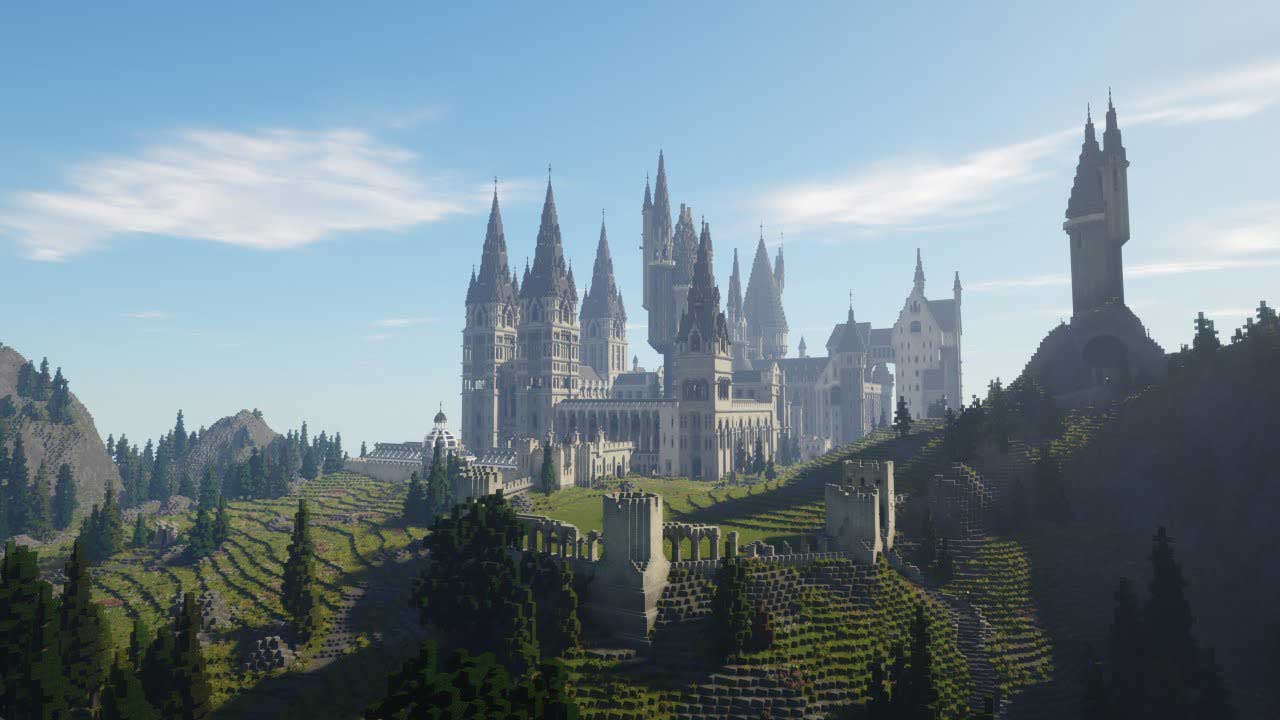