The mobile platform is great for racing – Touch control does not create many difficulties, and in some games, with the accelerometer, you can turn the gadget into a full-fledged steering wheel. We tell you about the coolest smartphone races in 2021.

If you’re looking for an unassuming arcade race in the style of Fast and Furious for pure entertainment, then Asphalt 9 is a perfect choice. It’s a colorful and vibrant game with cinematic jumps and races. 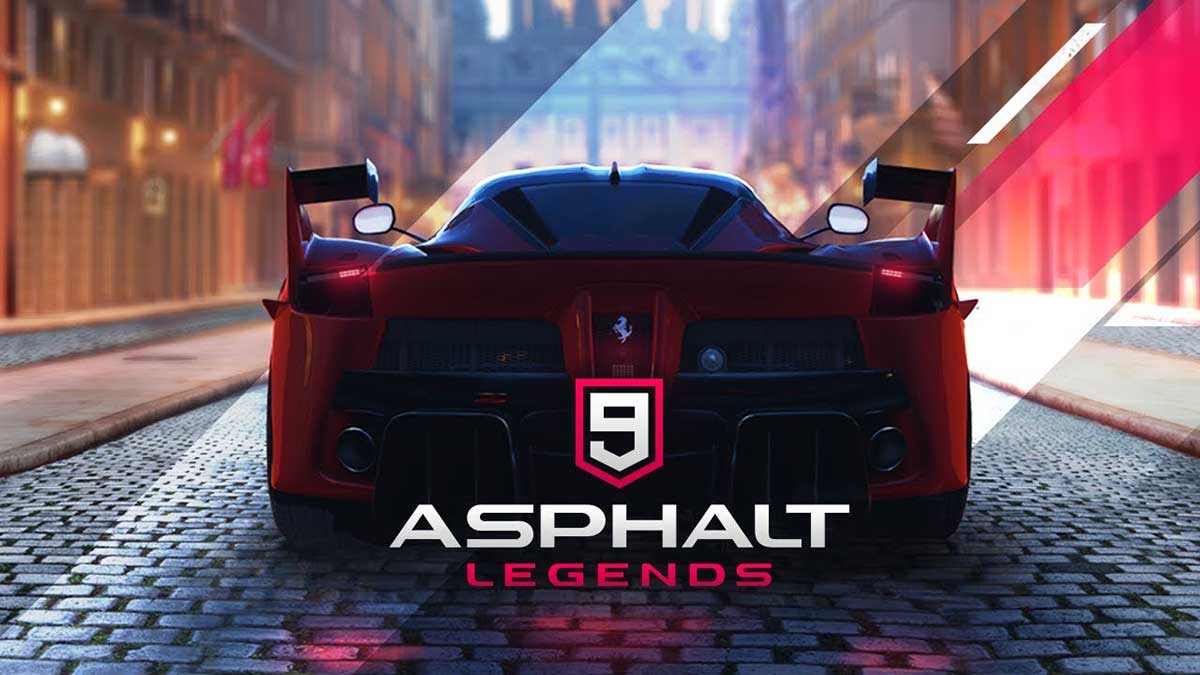 Like all previous installments of the series, Legends doesn’t try to seem like a car simulator. The controls here are pretty mediocre, and the cars more than reach speeds of 200+ kilometers per hour in just a few seconds. And that’s even without the use of nitro.

However, its main task Asphalt 9 copes with the «great» – The game entertains for long hours. Variety of tracks, the ability to knock out opponents, drifting, and more than 40 different models of cars with the ability to pump. All this is on top of stunning console-quality graphics.

Asphalt 9: Legends – It is one of the best races for mobile platforms, which will give a lot of fun.

The Forza series is practically the benchmark racing simulator for consoles and PC. However, not many people know that there is an equally interesting mobile version of this race. 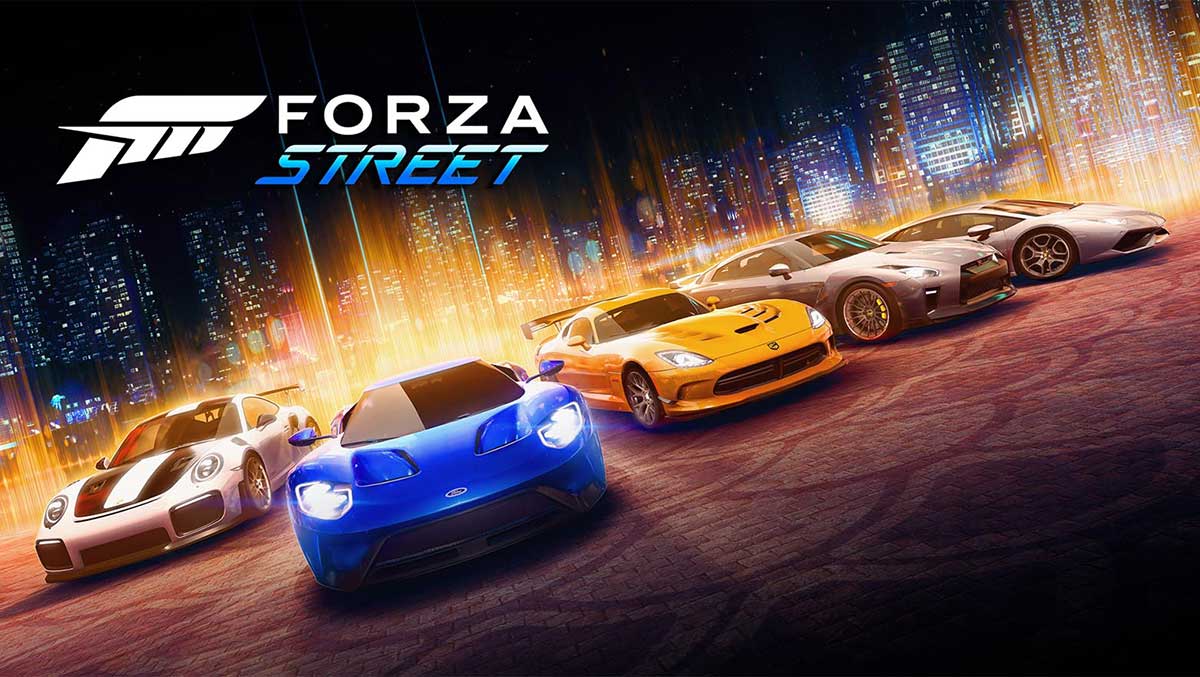 Forza Street is not an arcade race and not even a car simulator – it’s a beautiful movie. The gameplay is all about pressing one button at the right moments – to brake, accelerate, and nitro. You will not be allowed to drive a car. The race itself will be shown from the side in cinematic style.

Despite the variety of cars, most of them behave almost identically. For example, you can easily outrun the newest Lamborghini in an old BMW – All you need to do is hit the buttons on time. There is a career and a storyline, but they are quite formulaic and will not captivate for a long time.

As a result, Forza Street is almost nothing like its older counterparts. The game can hardly captivate for a few hours, but all because the players are not even given the to drive a car.

Need for Speed: No Limits

One of the most famous racing series NFS long ago began the conquest of the mobile platform. If we talk about one of the most recent games, you should try No Limits. 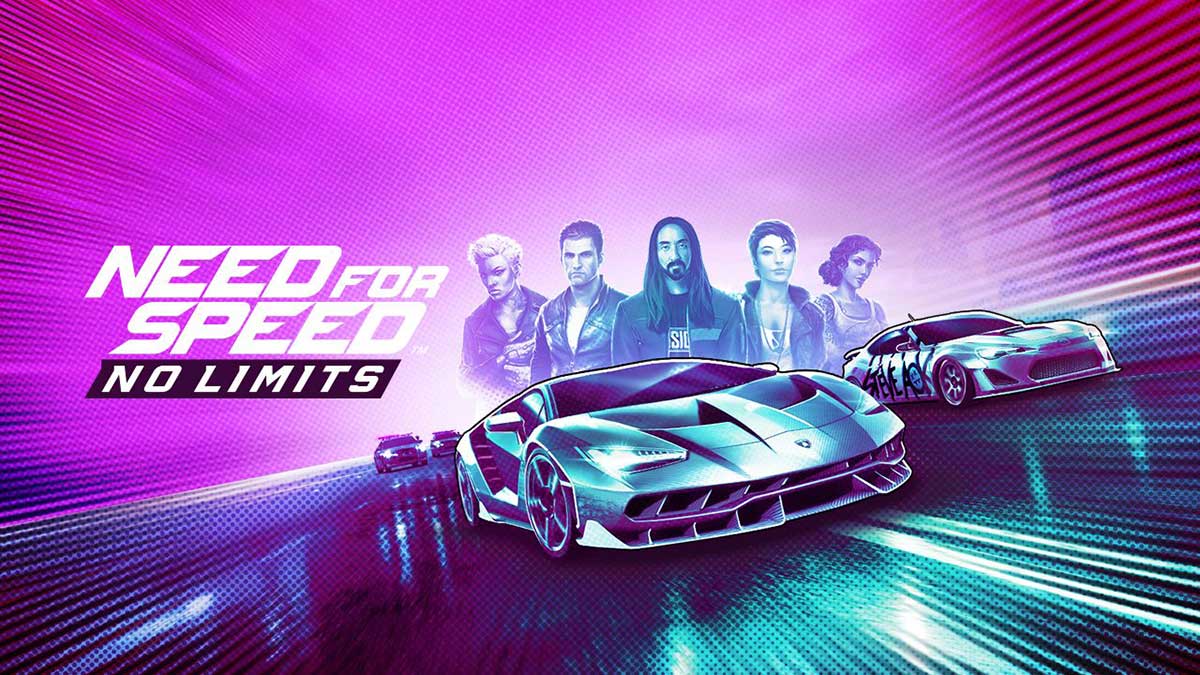 The plot is practically slipped with the legendary Most Wanted. You begin your journey as an unknown beginner, who will have to defeat the main street racers of the city. The races with the bosses here are some of the most interesting and exciting, but everything else – A fairly monotonous ride through the «guts» With a little twist.

In No Limits impressive selection of licensed cars, the possibility of external and internal tuning, and damage systems. What fans of the series will enjoy is the presence of the chases with the police. Let them look not so large-scale, and the helicopters will not be but create the proper atmosphere.

Need for Speed: No Limits is trying to bring the racing spirit back to the mobile platform. In some ways, the game succeeds – beautiful graphics and colorful races are available, but be prepared to pay extra money.

Perhaps Real Racing 3 is the best racing simulator for cell phones. The developers have focused on track racing and made a worthy of attention game. 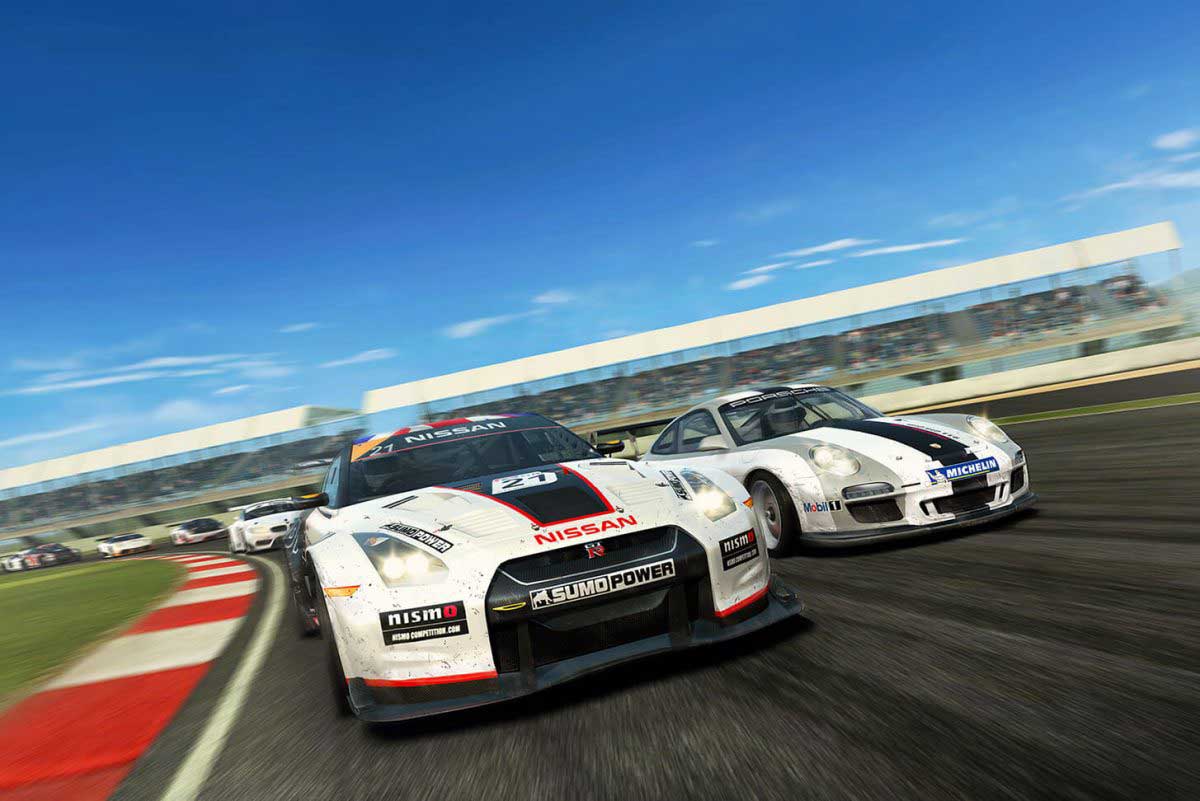 The first and most tangible plus of the game is – the stunning graphics. Famous tracks, elaboration of cars to detail, the presence of the view from the cockpit. In Real Racing 3 there are more than 60 famous cars and even their racing versions of GT and Le-Mans. For each car, the developers tried to make a unique behavior and sound of the engine. At least, the difference between Ferrari and BMW you can easily distinguish only by the sound.

Career is represented by several challenges in different categories. Races are quite dynamic and require concentration. You can also choose from several control modes. But pumping takes a huge amount of time. Prices in the game are exorbitant, and the top cars and improvements cost real money.

Ignoring the aggressive doughnut, Real Racing 3 is one of the best racing sims with stunning graphics.

Arcade races were popular decades ago. Among the exclusives from Nintendo was the famous Mario race, which received a lot of rave reviews. Now you can ride with your favorite characters and smartphones in Mario Kart Tour. 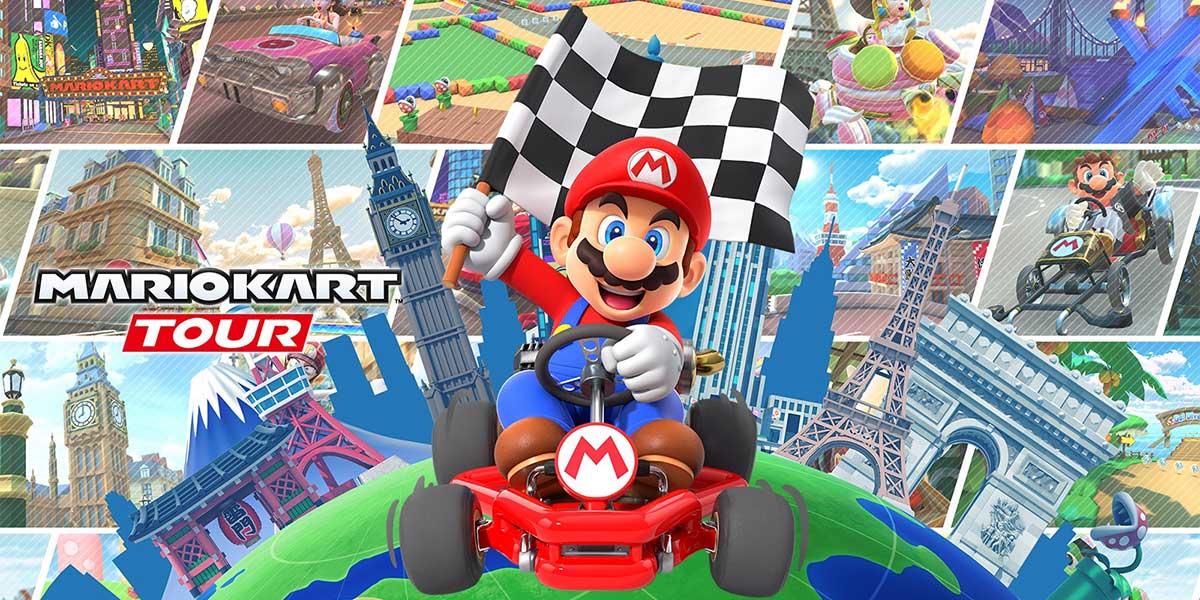 Cartoon graphics, a variety of tracks, and incredibly exciting racing – Are not the only advantages of the game. You’ll collect stars and unlock various bonuses as you progress through the championship – New maps, characters, and more. All this does not get boring even after a few hours.

The races are varied each time thanks to all sorts of bonuses, with which you can hit the enemy. But to the controls will have to get used to – steering will only have to use one finger, as well as drifting. Despite this, it’s not hard to win.

Mario Kart Tour is a must-play for all fans of this universe, and the rest can join these races for the sake of interesting gameplay on the miniature maps.

Test drive racing cars on smartphones allow not all games. In Real Racing 3 there are only a couple of pieces. If you want to play Formula 1, you can play F1 Mobile Racing. 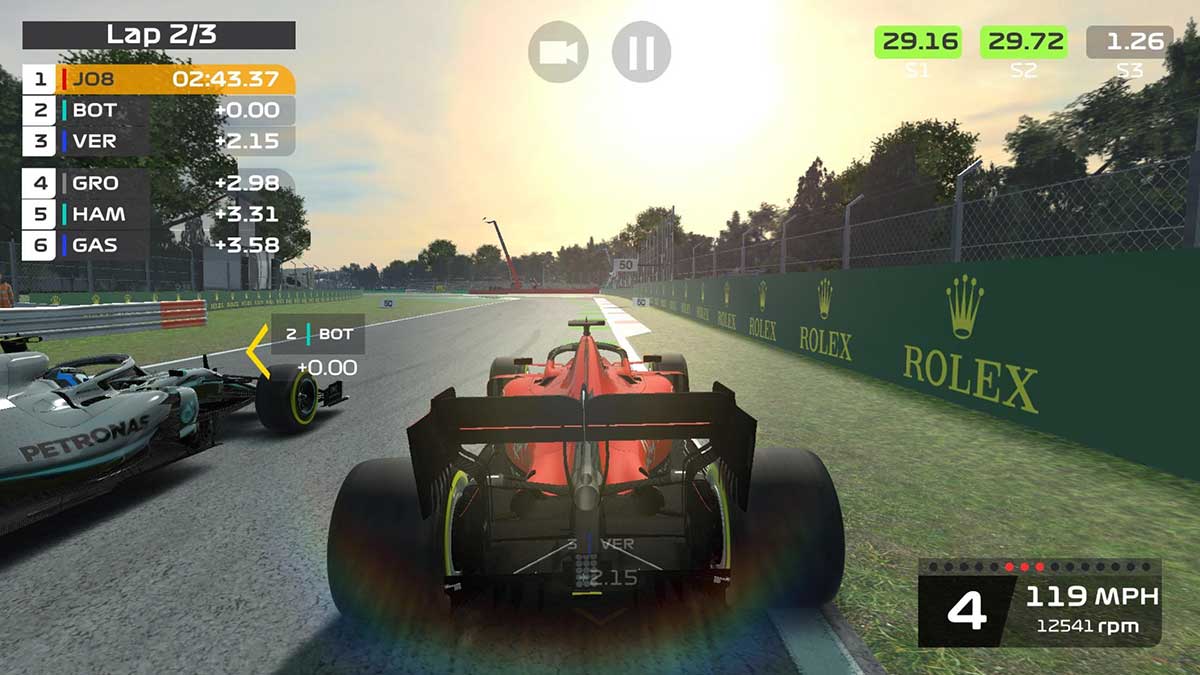 As the name suggests, it is a race about the championship of F1, where you will be offered to sit behind the wheel of famous race cars. This is the official championship game, so you will meet not only licensed cars, but also existing teams, as well as more than 15 tracks around the world.

The game has several leagues, which are sequentially opened as you go. There are several modes – Sprint, qualification, single race, duel, and others. In racing, players can choose the third-person or first-person view.

In terms of gameplay is more arcade. The car forgives the driver’s mistakes, and collisions do not end in a big accidents. Controls are quite responsive, but if you want more hardcore, you can turn off all the assistants.

F1 Mobile Racing, although it does not offer the high realism of Formula 1, allows you to feel like a race car driver and compete on real tracks with the celebrity racing world.

Remember the toy cars from the Hot Wheels series with the dizzying tracks? If you’ve ever wanted to feel like the drivers of these cars, Infinite Loop was created especially for you.

The game is very reminiscent of the arcade Asphalt, only instead of familiar cars and toy cars. The highlight – are tracks. Dozens of jumps, huge loops, and twisting turns – All in the best Hot Wheels tradition. In parallel, no one forbids beating out other cars on the track, just like in life. The game even features the destruction of a car in a head-on collision.

Several modes will not get boring, the range of cars includes more than 10 different models, including muscle cars, cars, and trucks. The graphics are top-notch – Bright colors, smooth flight animations, and colorful explosions.

A little familiar with Nitro Nation Drag & Drift Racing has a lot to offer and the overall experience does not lose even the best parts of NFS. 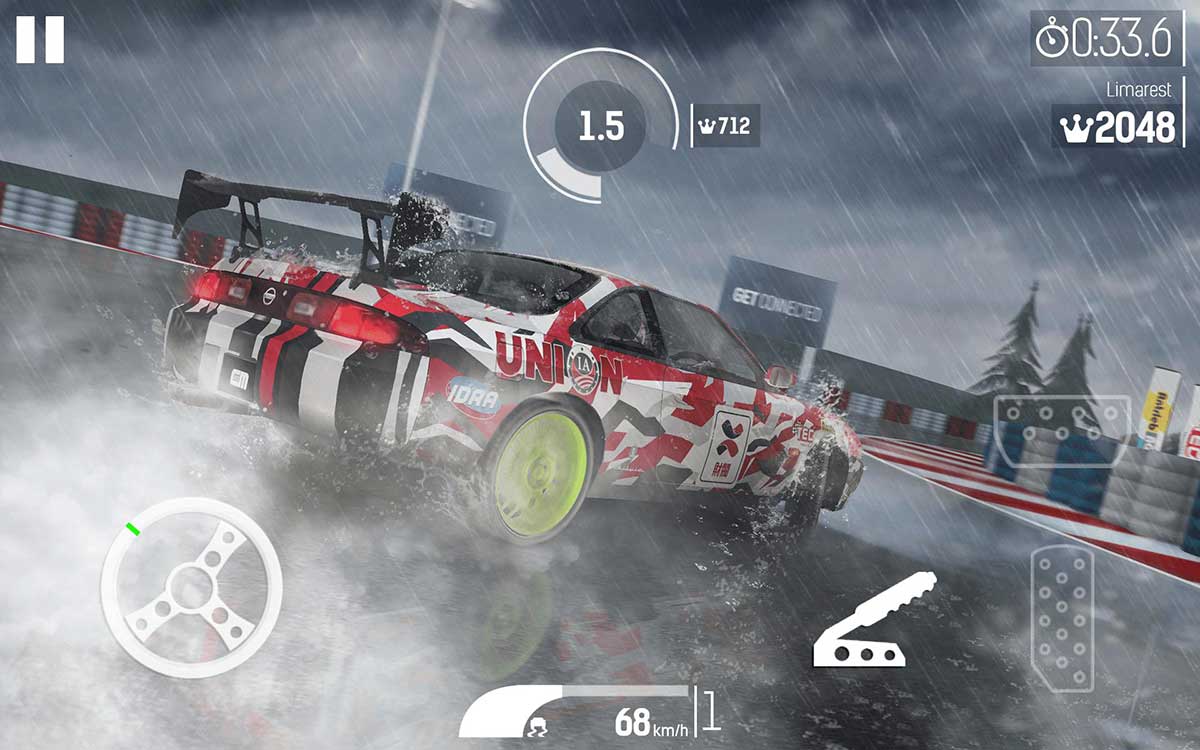 This is a classic drag simulator. Straight track, two opponents, and the players only need to switch speeds in time and do not forget to use nitro. In terms of gameplay, the game is as simple as possible, and the races usually last no more than 30 seconds. A recent update also introduced a drift mode with the ability to activate the handbrake.

What is interesting about Nitro Nation Drag & Drift Racing is the detailed tuning of the car. Here you can install dozens of parts, increasing power and reducing weight. Also, players have access to a couple of dozen licensed cars – BMW, Mercedes, Lotus, Nissan, and others. Nitro Nation Drag & Drift Racing even has a Fun section, where you can take a ride on a couple of tanks.

It all looks beautiful and interesting, so the career will draw you in for at least a few days.

This is one of the most balanced races, which has good graphics, sprints with multiple opponents, and a wide fleet of cars. 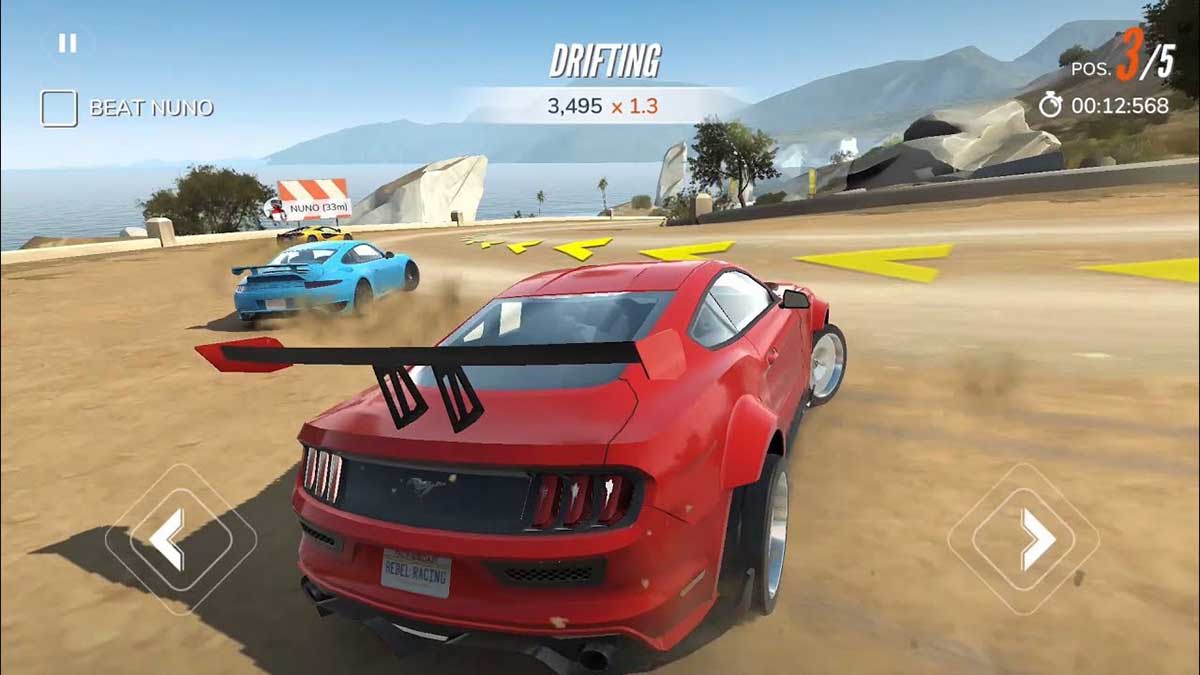 In Rebel Racing, you start at the bottom and gradually unlock new cars and competitions as you win street races. You can use nitrous in the races and go into drifting. The tracks are quite ordinary – The city and beach landscapes aren’t as heavily detailed, but at speed, the bad textures aren’t conspicuous. As you progress, you will come across bosses.

Controls can be called arcades, especially for high-speed cars. Since the game is free, the number of races is limited by the internal tank, which fills up automatically over time. Exterior and interior tuning are available for each car, but many modifications are only available for donation. Conditional disadvantage can be called only extremely easy opponents, overtaking which is not difficult.

Rebel Racing – A classic racing game with short races. It has no particularly attractive features, but you can’t call it bad either.

If you want to relax and find a simple race to pass the time in transport, then try #DRIVE. It is a «runner» With an infinite track, where your task is to drive as far as possible. 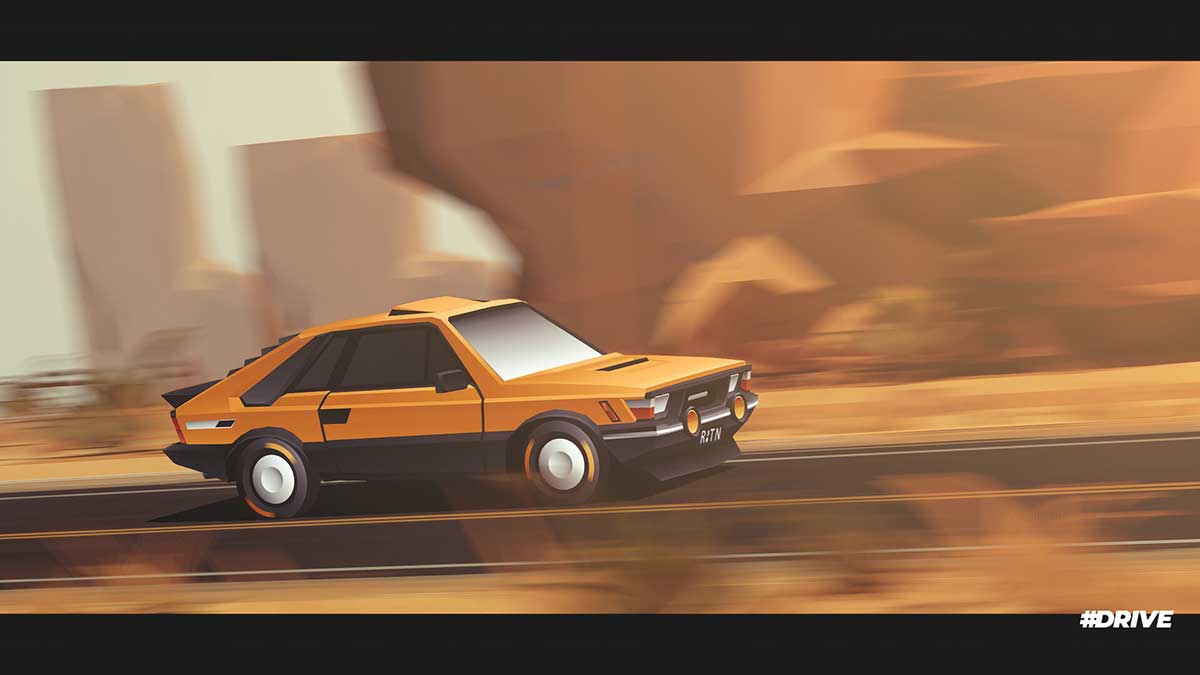 The game has nice pixel graphics, several tracks, more than 20 cars, and a relaxing soundtrack. There are plenty of challenges in the race. First, there is not only asphalt surface, but also off-road, where it is more difficult to maneuver. Second, the traffic in the game will be constantly increasing.

You don’t just have to keep an eye on the traffic. The car has a scale of damage, and the fuel is inexorably coming to an end. It’s all about catching repairs and refueling. Diversify the gameplay with pleasant bonuses and clashes with police officers.

Advertising in #DRIVE is present, but it does not spoil the impression and allows you to get extra bonuses. Otherwise, #DRIVE – This is a great arcade game with long races on beautiful maps. Best of all, the game is no hardware requirements for your smartphone.